Difference between revisions of "Pattern XP"

Jeskola Pattern XP is a custom pattern editor available in the current builds of Buzz (2009+).

Pattern XP can also be used separately as a control machine.

As a control machine, Pattern XP is a Meta-data editor, or Meta-editor for short. It can combine parameters, note control, automation, etc. from many other machines into a single pattern editor view through the use an assignment structure.

Pattern XP has many other improvements over the Native machine editors. Some of these improvements include step-editing from a midi keyboard and sub-pattern control.

As a custom pattern editor, Pattern XP can be selected as the editor for any machine by clicking the drop-down selection box labeled 'Editor'.

Parameters by default appear just as they would if you were using the machine's 'built-in' editor. If the machine uses Global track parameters they will be on the far left, followed by that will be a separator and then the machine's normal track parameters. The complete and total layout depends on what Generator or Effect you are using. Below is a comparison of Mtrk2 using it's built-in editor (left) and Pattern XP (right). The only difference you'll notice is the addition of a new tool-bar just above the pattern editor and the title of the machine at the top (in this case “MTrk”).

As shown above, in it's default state there really aren't many differences between the Built-in Editors and Pattern XP, therefor you should already feel right at home. However, there actually several improvements already available without having to get into Pattern XP's more advanced features.

Copy and Paste has been improved dramatically. With Pattern XP, regardless of what machine you are copying and pasting from or two, any compatible data will be copied and pasted into their proper columns. With the Built-in editor you can not do this. It could only copy from machines of the same type, or with note data you would have to resort to copying just a Note column and pasting it properly into the target machine. This has been greatly simplified in Pattern XP; you can now do a Select-ALL and a Paste-ALL from one editor to the next and any compatible data will be pasted into it's correct locations.

The mouse can now be used for Cursor position, Selecting, Copy, and Paste features just as you would in many Windows applications. In the Built-in editor, this functionality was almost strictly reserved for keyboard use. You can also use the Arrow-Keys + Shift to select data.

In Prior versions of Buzz and with the Built-in Editor, when you wanted to work in different time signatures you could set your pattern and sequence to any length but the Row highlighting wouldn't update, as a result it always highlighted based on 4/4 timing despite what signature you were working in. On Pattern XP's property window (click the 'Columns...' button or press CTRL-Backspace) you can now select a division for the highlight formatting instead of just pattern Length.

Pattern XP also has several new shortcuts and work-flow improvements regarding interplay between the different elements that make up your pattern. For example, if you double-click the name of a machine the Parameter Window for that machine will appear. A list of all shortcuts and work-flow methods are listed at the end of this document.

Parameter Assignment Unlike the built-in editors which have a static set of parameters however, Pattern XP allows you to define your parameters (if you want to). The parameters you add can be selected from any machine or plug-in already added to your project or conversely you can use it to remove parameters in order to simplify the pattern view of a specific machine. For example, below is an image of Mtrk2 with 3 Tracks showing only the Note, Wave#, and Volume parameters. 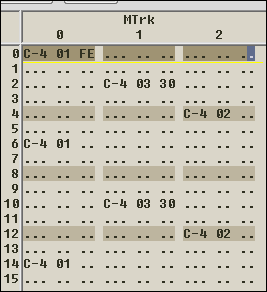 Access the assignment editor by clicking on the 'Columns...' button at the top left of Buzz's pattern view as depicted below:

This will bring up the 'Pattern Properties' dialog box. The settings for the above example would look like this: 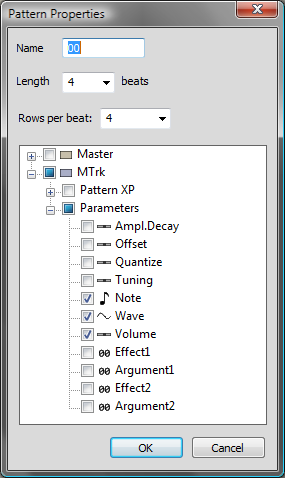 By right-clicking the Editor selection box, you can choose which Editor will be the default editor for all machines or specifically for the machine you are working in as depicted below. By default, before you ever make any changes, the <built-in> Editor will be used.

extra images for later use. 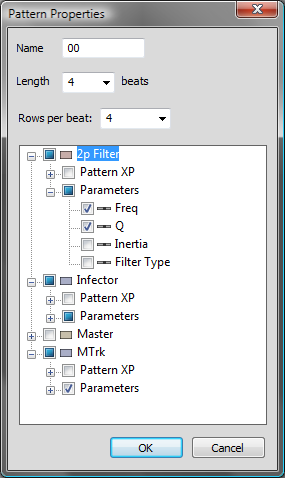